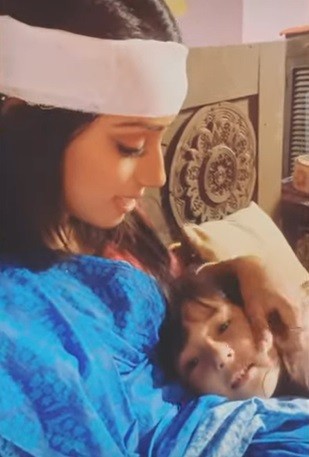 It was eariler seen that Rudraksh leaves with Bunty while Roohi breaks down thinking of Rudraksh.

Rudraksh runs to meet Roohi while Bunty feels that Rudraksh bonds well with Roohi as she is his daughter.

Meanwhile, Yuvraj meets Roohi and he says he knows her secret friend is Rudraksh.

Roohi says that she wants Rudraksh to be her mother's husband which shocks Yuvraj.

Later, Yuvraj clicks Rudraksh's picture to show it to the mukhiya.

In the upcoming track of the show, Saachi informs Roohi about Preesha's accident.

Roohi to unite Rudraksh and Pressha

Rudraksh consoles Roohi to take care of her mother while Yuvraj takes Preesha to the hospital.

Unfortunately, there will be no face-off between Rudraksh and Preesha.

Further, Roohi will want Preesha to get married to Rudraksh.

YHC: Yuvraj to create a mess in Rudraksh (Abrar Qazi) and Ro...