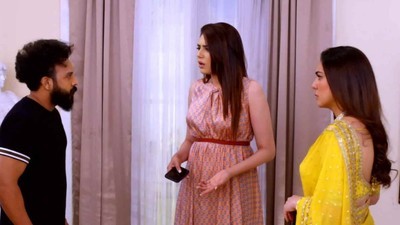 In the upcoming track, Preeta gets teary-eyed and tells Srishti that she cannot express her feelings.

Preeta tells that she fears that she is constantly being watched by Prithvi due to CCTV cameras being everywhere.

Prithvi watches them live on his phone but fails to hear their conversation.

Later, Prithvi hears Preeta and Malkani’s conversation on his phone and learns that Karan’s court hearing will happen in 2 days.

Sameer then accuses Preeta of implicating Karan and reveals the truth about Preeta giving money to Maddy in front of Luthra's.

Shrishti loses her cool at Sameer and she lashes at him for blaming Preeta while Preeta asks Shristi to keep calm.

Preeta then decides to go ahead with her plans so that Prithvi does not doubt her.

The drama gets more intense when Prithvi will create a scene in front of the Luthra family to prove Preeta wrong.

Preeta will give Prithvi a tight slap in front of the whole family.