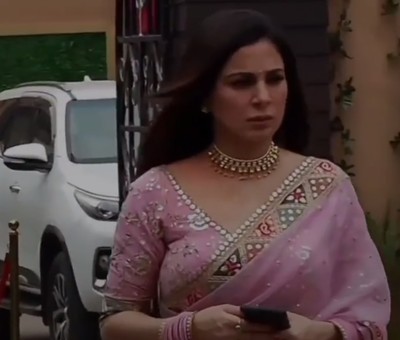 Rakhi says to Shristi to not change like Preeta did and tells her that they all have loved her but Preeta showed her true colors and leaves from there.

Preeta gets tears in her eyes and says that she won't be weak and she can't risk Prithvi doubting her.

Preeta calls Malkani while Prithvi is watching her through the CCTV but is not able to listen to her.

Gireesh comes to her and tells her that Malkani is here which Prithvi hears and says that he won't let Karan come out of the Jail.

Rakhi meets Karan and feeds him. He asks her whether Preeta cooked it to which she denies and tells him that Gireesh was the one to cook it.

Rakhi gets tears in her eyes while Karan asks her not to cry. He tells her that he will come out of the Jail as he is in innocent.

He tells her that he will be a complete changed man after he comes out while she asks him not to change.

He tells her that he needs to change. Rakhi tells him that she has a feeling that Preeta's statement has a reason behind it.

He then tells her that only Preeta has benefit hence she framed him and put him behind the bars. Rakhi slaps him and tells him that Preeta loves him. He asks her to feed him.

Preeta who has heard everything gets tears in her eyes and she thinks that he don't love her and leaves from there.

Preeta calls the private investigator home. Prithvi hears this and thinks that he won't let Karan get out of the Jail.