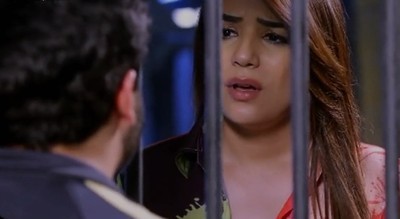 In the Upcoming track of the Kundali Bhagya, the show is gearing up for high voltage drama with Karan sending Preeta to the Prison.

We have witnessed that Prithvi frames Karan in the Match fixing and sends him to the Jail.

Preeta tells Reporters that Karan is clean as a Business Partner not as his Wife. Prithvi provokes Karan against Preeta.

Preeta comes to meet him but he denies to talk with her.

However Karan shares his doubt with Sameer that he thinks that Preeta is the one to frame him in match fixing.

He also tells him as to how it will benefit Preeta which makes Sameer believe him.

Sameer brings Karan out of the Jail proving him innocent on Bail.

They both then follow Preeta where Prithvi creates such instances that makes it seem like Preeta is the culprit.

Unfortunately Karan sends Preeta to the Prison showing the fake proofs against her that he thinks to be true.

The drama will intensify ten folds in the upcoming track and We don't want you to miss it.

How will Preeta prove her Innocence?