GHKKPM: Not just Sayi but all the ladies of Chavan Nivas to work (Latest Spoilers Alert) 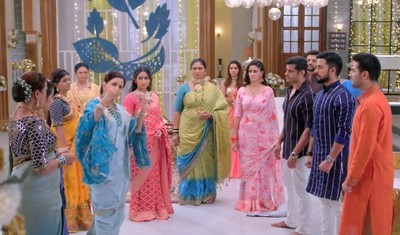 GHKKPM: Not just Sayi but all the ladies of Chavan Nivas to work

As seen so far, Virat requests Bhavani's forgiveness for lying but she denies listening to him.

Virat says everyone was looking happy with his lie and asks if it's wrong to keep his family happy.

Virat further says that she put Sayi in shock and blackmailed him with her question on their wedding day.

Bhavani repeats that Sayi can either be a Chavan family bahu or a doctor.

Virat then asks her why didn’t she question if he wants to become an IPS officer and Samrat an army officer.

Virat further questions why Sayi Patralekha or Karishma work and be self-reliant.

Mohit and Samrat take stand for Pakhi and Karishma

Here Samrat says he would support Pakhi if she wants to work or restart her blogging.

Mohit says even Karishma wanted to work and he supports her decision and stands by Virat's side.

Bhavani that even his brothers respect their wife’s decision and they want to show what self-respect is.

Will Bhavani change her decision?

Trouble ahead for Sayi once again in Ghum Hai Kisi Ke Pyaar ...

GHKKPM: Virat accusees Bhavani of blackmailing Sayi on their...