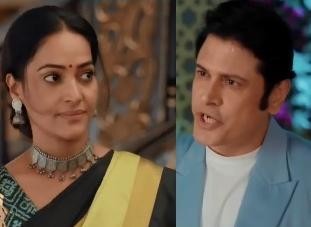 It seems Nikhil returns to India for the marriage of his daughter Barkha.

Barkha hs left with no option then to agree for Barkha and Ishaan's marriage.

Now when they go for an alliance talk Nikhil is there before Pallavi.

Nikhil introduces self as Nikhil Jaisingh who is Barkha's father where Ishaan is much impressed with him.

The Pallavi marks her entry when Ishaan's mother pulls her for a family photo when she gets shocked to see Nikhil.

Later the duo meets in a room for a private confrontation.

Nikhil and Pallavi turn much violent and fight with each other for seeing each others face when Nikhil states that Barkha wanted him to attend her wedding leaving Pallavi shocked.

Let's see what destiny has planned for Nikhil and Pallavi.

Apnapan: Love to bloom amid Nikhil Pallavi once again

Apnapan: Love to bloom amid Nikhil Pallavi once again The u...