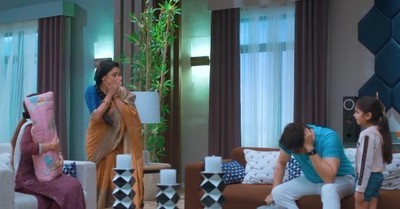 It seems Kinjal and Anuj along with family are back home where Anupama goes to school to drop Choti Anu and later to office and then dance class.

Anupama is tied up with so many things when Kinjal's baby Arya keeps crying and does not stop.

Without Anupama poor Kinjal is unable to take care of the baby.

On the other side Barkha comes and just instigates Kinjal against Paritosh and goes away.

When Kinjal seeks help from Anuj as Arya is choked.

Anuj tries to get up and help Kinjal and he falls down on the floor and hurts his head hard.

Anuj is in deep pain and on the other side Kinjal also cries as Arya is choked.

Anupama is in a tight spot as in whom to save and support.