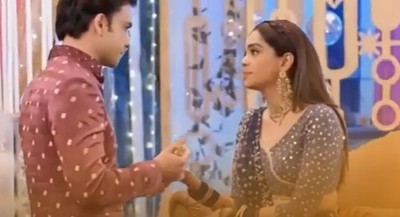 Zee TV's most liked show Kumkum Bhagya is gearing up for high drama and action.

It is seen that Rhea has managed to prove that Ranbir is the father of her child.

Further, she also demands apology from Prachi for humiliating her.

Rhea is celebrating over her victory and confident that Prachi cannot win Ranbir back now.

But Ranbir is moved by Prachi's faith in him and decides to stand strong with her.

However, soon Rhea is going to get the shock of her life with Ranbir's big step.

Ranbir declares his love for Prachi irrespective of whoever is the father of her child.

Further, he announces his marriage with Prachi and vow to take care of the child.

This is going to bring a huge drama and twist in the show.

Kumkum Bhagya: Pallavi's ultimatum to Prachi on her sangeet