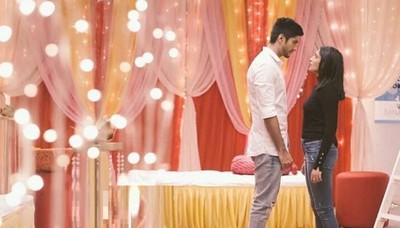 The current episode starts with Sid and Ishani talking to Shashank and Juhi about the marriage of Jessica and Jignesh.

Shashank tells them about the last marriage which happened in the Sanjivani hospital and Juhi only managed everything.

Juhi and Shashank talk about how they got a patient's daughter married before him which was his last wish before his death.

Shashank and Juhi like Sid and Ishani's such plan.

They compel Sid and Ishani to talk to Vardhan about the same and convince him without creating any fuss.

Sid tells Vardhan about a spa offer and asks him to visit the resort while Ishani is against Sid's plan.

Ishani wants to talk directly to Vardhan about the marriage.

Suddenly, Vardhan arrives amid their conversation. Ishani tells him about Jessica and Jignesh marriage.

Vardhan shockingly agrees and gives permission to Sid and Ishani.

Sid is completely shocked at how Vardhan agreed so fast while Ishani is excited.

Rishabh is confused and asks Vardhan about why he gave permission to them.

Vardhan sees Anjali and says that he likes marriages and especially the marriage rituals.

Sid and Ishani surprise Shashank by giving the news to him.

Shashank congratulates Jessica's mom who is nurse in their hospital since a long time.

Shashank calls Jessica his daughter and announces her wedding in Sanjivani hospital, nurse Fillow gets happy while she thanks Sid and Ishani.

Sid and Ishani announce the wedding news to the staff where everyone gets excited and agrees to arrange everything.

Then only, Rishabh comes and agrees to arrange best Pandit for the marriage.

Sid and Ishani are stunned at Rishabh's such step.

Sid and Ishani thereby come to cafe for the coffee where they talk about Vardhan and Rishabh.

Juhi speaks out her pain before Shashank

Juhi comes to Shashank and apologizes for being rude to him and agreeing to Vardhan's wrong decision.

Shashank accepts his mistake also while Juhi tells Shashank that his decision of ousting her from Sanjivani changed her whole life.

Juhi reveals about how Rahul completely changed after their marriage.

Juhi heartily apologizes while she asks Shashank if he really loved her.

Sanjivani 2: Vardhan and Anjali's relation to get fishy amid Vardhan's innocent drama

Sanjivani 2: Vardhan and Anjali's relation to get fishy amid Vardhan's innocent drama The daily soap of Star Plus, Sanjivani 2 is seeing a lot of twists and turns in the ...

Sanjivani 2: Sid and Ishani go lost in romance giving restless nights to Ishani The popular soap Sanjivani 2 is moving forward for the interesting twists and turns in Sid and ...

Sanjivani 2 7th October 2019 written update The current episode starts with Ishani and Sid making plans to unite Jessica and Jignesh's love relationship. Jessica is not ready to accept Jignesh as ...

Sanjivani 2 Latest News: Ishani bends on knees to propose Sid with ring The time has come when Ishani will propose her love to Dr. Sid in the upcoming episode of ...

Sanjivani 2: Actress Chandni Bhagwanani replaces Rashmi Singh as Dr Aisha The popular TV serial of Star Plus, Sanjivani 2 is going to see a new replacement in the character. Actress Rashmi ...

Sanjivani 2 3rd October 2019 written update  The current episode starts with Sid apologizing to Ishani while he requests Ishani to open the door. Ishani welcomes Sid in the house and apologizes ...

Sanjivani 2: Sid and Ishani to get Jessica married before unfortunate death

Sanjivani 2: Sid (Namit Khanna) and Ishani (Surbhi Chandna) to get Jessica married before unfortunate death The upcoming episode of Star Plus show Sanjivani 2 will showcase interesting twist and turn. Sid ...