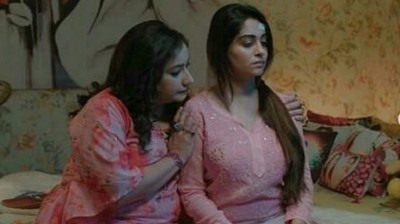 The current episode starts with Sonakshi gaining conscious after the successful surgery.

Suman comforts Sonakshi while Pari swears to ruin the Sippys, who dared to stoop so low to do such thing with Sonakshi.

Pari calls Rahul and asks about Tanya and Rohan that Rahul asks her to move on.

Pari assures that she wants to apologize to them and move on while the guy agrees.

Where Rahul gives Tanya and Rohan’s location, Pari reaches there at the café and evilly smirks at Tanya.

Tanya sees Pari but Rohan refuses and helps her in food.

Pari sneakily mixes the pill in Tanya’s food but Rohan catches her and yells at her.

Rohan reveals about Rahul who already informed him. Rohan stopped Tanya from eating the food while he confronts Pari for trying to harm Tanya and their child.

Rohan confesses his love for Tanya compelling he wants to save his child while he reprimands Pari to stay away from him.

Rohan leaves while Pari gets pissed off and decides nothing is over between them until she says.

After 5 days… Suman gets tea for Sonakshi while she explains her that Sippys didn’t valued her while she is thankful that Sonakshi got free of fake relations.

Suman tries to explain Sonakshi that Rohit also accused her where love turned out fake, she calls everything like love is nonsense.

Sonakshi is upset yet she agrees with the nonsense where she faced the truth while she stands Suman right but she always took her wrong.

Sonakshi swears that there is no place of love and trust in her life, now she only has her and her work.

Here Rohit is badly drinking alcohol confessing his love for Sonakshi while she prays for Sonakshi to hate him.

Sonakhi gets angry and calls Sona is dead in this journey and decides that love is just fictional and there is no place of such nonsense in her life.

While here Rohit agrees none can replace Sona in his life, here Sonakshi burns her and Rohit’s marriage photo recalling everything.

Rohit and Sonakshi’s divorce news goes viral where Sonakshi reaches on her KPK shooting set where some women gossip about Sonakshi.

Sumit welcomes Sonakshi while he confronts the ladies and shame on their mentality.

The ladies still taunt Sonakshi whose husband left her while Sonakshi takes stand for her self-respect while she explains about a husband and wife relation where only they know the reason of breaking marriage and asks if a woman’s respect and her importance end after divorce.

Sonakshi no more cares about the gossips. Sonakshi has decided to focus on her work and take her talent to new heights as she wants to prove Rohit that he can’t break her.

Sonakshi wants to earn a bigger name than Sippys.

Here a man compels Rohit to do the operation as he is ready to pay any amount, Nishi agrees but Rohit comes drunk.

Nishi tries to handle the situation and tries to stop the man but Rohit’s drunk state messed up everything.

Ajit confronts Nishi making her realize that she ruined Naren and Rohit and got the hospital but how will she run the hospital without them.

Ajit also reminds her of Sonakshi, to whom she ousted from Rohit’s life and now Nishi will have to pay for everything.

Suman gets a business proposal where Sonakshi asks her to do anything what she feels right.

Sonakshi calls Ajit and fixes a meeting with Rohit.

Rohit is outside a bar where he gets shocked seeing Sonakshi.

Sonakshi gets shocked when Rohit humiliates her asking if she came to beg before him to accept her back.

Sonakshi instead thanks Rohit for first loving her and then cheating her while Rohit pays no heed to her.

Sonakshi asks if he read her accident news and didn’t think to meet her once while Rohit taunts she is looking fine or if she wants attention.

Sonakshi gets pissed off and challenges to get ahead of him in money while she challenges to earn more money, name and fame than him and break his pride.

Rohit asks Sonakshi if she got any rich man while Sonakshi taunts his dirty mentality.

Sonakshi confesses about how a woman is alone enough to get successful.

Rohit and Sonakshi have a major showdown.

Where Rohit changed her love in hatred, now Sonakshi swears to prove this hate in success.

While Sonakshi leaves, Rohit gets happy thinking he wants this Sona who leaves me and move on.

After 4 months, the media inquires about Sonakshi while Sonakshi comes to Police station in mdern avatar.