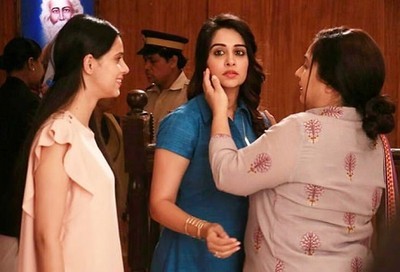 The current episode starts with Sonakshi agrees to dance in the party.

Where Rohit reaches in the party and all his friends gather for pre-valentine party of only boys, Sonakshi comes hiding her face behind veil.

However Rohit didn't recognizes Sonakshi but when Sonakshi removes her veil and turns, she gets shocked seeing Rohit.

A friend reveals other friend the party organizer that the TV actress whom he called is Rohit's Ex-wife.

The friend apologizes to Rohit while Rohit and Sonakshi both recall their separation time.

Rohit taunts Sonakshi and refuses to see the dance while he insists his friend to send the dancer from the party or he will leave.

The friend asks Sonakshi to leave while Sonakshi insists for dance but all in vain.

Next morning, Sonakshi gets worried after all she doesn't has money and today is Suman's bail hearing. She fears if her lawyer will come.

Suddenly Sonakshi's lawyer arrives and asks her to go for hearing as he got the 4 lakh which she send in the morning through a man.

Sonakshi is stunned that Sumit enters.

Sonakshi gets emotional while Sumit consoles her saying her best friend is alive and will bring aunty back. They head for the court hearing.

The lawyer defends Suman and requests for bail from the Judge while reveals about her heart problem.

The Judge is about to take decision but Rohit comes saying he has an evidence against Suman.

Sonakshi, Pari and Suman are shocked while Rohit calls Suman a greedy woman who can do anything for money.

Rohit reveals that he met Mr. Goel in last month who built a royal and lavish residencial building for the rich people and because of Suman, he is not able to visit India.

Suman's lawyer proves the evidence which Rohit gave that his statement proved that Mr. Goel is a fraud and we can take action against him.

Interestingly Rohit has indirectly helped Suman and proved her innocent but Rohit acts like he was trying to prove Suman wrong.

Suman finally gets bail but is angry at Suman while the same with Sonakshi.

Sonakshi confronts Rohit for trying to prove her mother wrong.

Sonakshi and Rohit have a heated argument when Rohit calls her and her mom are gold digger.

Rohit leaves in anger while Sonakshi regrets if their such true love were never true but a lie of their life.

Rohit sends a heart balloon through a little girl.

Sonakshi feels happy when the girl sends Rohit's message to Sonakshi saying her fan sent her this balloon and I Love You message.

» Kahaan Hum Kahaan Tum: Rohit’s I Love You for Sonakshi on Valentines Day