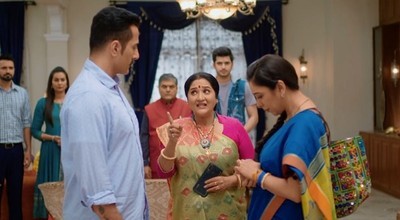 The current episode starts with Pakhi thanking Nandini for coming as Samar was making them bored with his boring dance lesson.

The family likes Nandini’s couple dance idea where after Nandini pairs all the couples.

Mamaji gets sad finding no pair when Meenu joins him, they all have fun and gala time while Nandini is teaching them couple dance steps.

Samar is very much surprised and looks lovingly at Nandini while Nandini is enjoying the dance with Samar and cheering up other couples.

Leela calls Zhaveri and gets shocked while here Anupama enters in the house with the ring in her hands.

The family gets stunned when Rakhi reveals her excitement and praises Anupama after how she agreed to her demand and got a diamond ring for her Kinjal.

Vanraj and Baa are stumbled in shock while Paritosh is happy when Rakhi agrees to how Kinjal always says that her Anupama Aunty is the best.

Anupama stands silent and upset while Rakhi indirectly taunts Vanraj saying Anupama chose her and thought about her happiness.

Vanraj asks Pakhi to follow Rakhi to their manager when Rakhi and Pakhi leave while angry Vanraj confronts Anupama.

Nandini also leaves thinking about how tensed Anupama is and hopes everything gets fine.

Rakhi and Pakhi are on the way when Rakhi thinks sorry Anupama but a person should not be good to this extent that to make one person happy, he falls in everyone’s eyes.

Vanraj questions Anupama about the money through which she bought the ring.

Baa reveals how Anupama sold her jewellery and purchased the ring.

Angry Leela questions Anupama if she will sell this house one day if Rakhi will ask her to do so.

Anupama tries to explain Baa when furious Vanraj bursts out at Anupama.

Anupama shivers in fear when Vanraj questions how dare she sold off 5 lakhs jewellery just for a mere ring and didn’t even ask anyone in the family.

Vanraj questions the reason when Anupama says Paritosh was sad.

Vanraj’s anger boils up and questions if she will sell her kidneys the next time when Paritosh will get sad.

Vanraj wrecks his anger on Anupama while Babuji is supporting Anupama.

Vanraj makes Anupama realize that the ring is not a ring but it is Rakhi’s slap on his face and she manipulated her to buy this ring to humiliate him and his parents.

Vanraj stands Anupama responsible for humiliating his family’s dignity in front of Rakhi.

Vanraj questions Anupama from where she got the idea when Anupama tells that she heard Dolly and Baa talking.

The flashback shows Dolly showing her gold bangles which she bought in exchange for her earrings.

Baa gets angry at Anupama for not hearing full conversation and taking decision herself while Anupama says she thought that it is right to get the jewellery in exchange for the other jewellery.

Anupama reveals she only sold the jewellery which her family gave to her not the one which Baa and Vanraj gave to her.

Baa stands up and confronts Anupama saying it all belonged to them but today she distributed it saying they were hers, not theirs.

Baa gets angry at Anupama when Babuji interrupts in between.

Vanraj gets angry at Anupama and sits disappointed when Baa asks Anupama to bring the jewellery which she gave to her while the whole family stands stumbled in shock.

Anupama gets shaken when Baa demands all the jewellery she gave to her, from necklaces to rings, from earrings to coins, hand over everything to her.

Baa snatches Anupama’s right from the jewellery she gave to her and refuses to trust anymore on Anupama.

Anupama is broken down in tears and leaves…Anupama song plays.

Rakhi sends Pakhi home when Rakhi gets a call from Mrs Patel who is returning back to India after one month.

Rakhi is super happy and then gets idea thinking within a month, a lot will be changed.

Here Anupama is collecting all her gold jewellery when Paritosh comes and apologizes to her on behalf of Baa and Vanraj.

Anupama cheers up Paritosh while here Leela is calculating everything that she gave to Anupama until now.

Babuji and Mamaji are trying to explain Leela but Leela is not ready to understand.

Leela is angry at Anupama while Babuji is trying to make Leela understand.

Anupama interrupts in with all her jewellery.

Kavya rushes to Shah House in the midnight.

The family gets shocked when Kavya in the reckless state runs and hugs Vanraj saying she left Anirudh and will now live with Vanraj only.

Anupama stands shocked with tears in her eyes.

Anupama (Rupali Ganguly) to finally burst out AT RAKHI DAVE&...

Anupama: Kavya’s clever move to use Rakhi against Vanraj and Anupama

Kavya to play her new game against Vanraj (Sudhanshu Pandey)...

Anupama: Anupama and her toughest challenge to getting Parit...