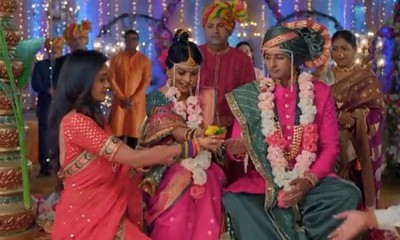 The current episode starts with Virat interrogates the neighbour ladies about Pulkit's wife but they deny it as Pulkit is living with Harini and his sister.

They refuse to know Sangeeta Deshpande when Virat leaves with his team.

Sonali shows the burnt letter to Bhavani when Bhavani holds Sayi responsible for destroying the letter.

Bhavani bursts out in anger when here the Baarat arrives with groom Pulkit.

Devyani jumps in happiness when Devyani requests Sayi to welcome Pulkit as his mother-in-law after all her mother is not here.

Virat tracks Sayi's location to Pawani Lawns and gets furious.

The rituals begin, Sayi performs Pulkit's aarti as Saas when Pulkit touches her feet after all she helped him so much.

Pulkit gets emotional when the wedding rituals of garland begins.

Sayi hopes Virat to arrive late when Pulkit and Devyani exchange garlands and Devyani is quite happy.

Sayi gets Pulkit and Devyani married, Virat on the way

Bhavani compels how history will repeat after 10 years.

Virat arrests Pulkit on the charges of eloping a mentally unstable girl without her parent's permission.

GHKKPM: Virat curses his love to break all ties with Sayi