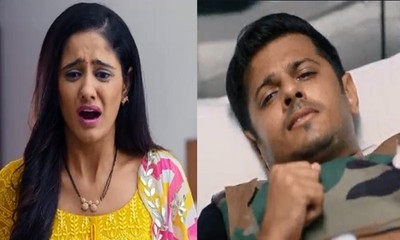 The current episode starts with Sayi cries bitterly missing Virat and regrets for not picking up his call.

Sayi gets into an argument with her roommate who makes Sayi realize that soon she will return to her husband while she compels Sayi to not panic.

Virat is having a deadly gunfight with the terrorists while here Ashwini yells at Pakhi.

Ashwini warns Pakhi to not dare come in between Virat and Sayi after Sayi will return to the house.

Sayi lights diya in the temple and starts praying for Virat’s life.

Sayi cries badly as she confesses that she has no one in this world except him and she can’t bear losing him.

Virat sees a police officer on the terrorist’s gunpoint and recalls Ninad telling him that never let someone sacrifice his life for you.

Virat falls while here Sayi gets negative vibes and breaks down in tears.

The family and Bhavani pray for Virat’s safety while here Sayi’s roommate consoles her.

As Sayi prays for Virat and closes her eyes, here Virat also closes his eyes after praising his officer for their bravery.

Virat and Sayi together recall all their moments of love. Virat switches on his phone.

Sayi gets a huge shocker when the sub-inspector picks up her call and informs about Virat being hospitalized.

Later the officer calls Chavan family and informs about Virat which leaves everyone shocked to the core.

The family rushes to meet Virat while Pakhi is heartbroken in tears.

Sayi recklessly runs to meet Virat but has no clue of his whereabouts.

Sayi calls Virat’s Senior Officer to know Virat’s whereabouts where after she recalls her father Kamal losing his life.

Sayi regrets how last time she failed to talk to her Aaba and if this time she will fail to talk to Virat also.

Pakhi stops Sayi from meeting Virat when Sayi swears that if Virat will not call her the next morning, then she will never meet him.