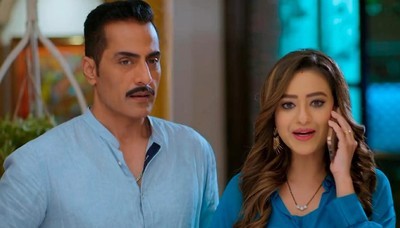 Today’s episode starts with Rakhi asking Kinjal to give mobile to Anupama. She says to Anupama that post whatever if happening at Shah House, she feel Kinjal and Paritosh should separate.

Anupama agree with Rakhi and says Kinjal and Paritosh’s happiness matters above everything thus, she doesn’t have any problem with duo walking out of the house.

Kinjal asks Anupama why she is agreeing with Rakhi.

Anupama says post wedding initial years are important to build the relationship, thus she doesn’t have any problem if, kinjal and Paritosh will spend some time alone together.

Rakhi thanks Anupama for understanding her. She asks Kinjal to think upon it too. Vanraj recall Anupama and Hasmuk’s word.

He decides to restart again. Vanraj goes to Kavya and kiss her forehead. Leela asks Anupama, she seems disturbed if anything happen.

Later, Anupama hatches an idea for Vanraj. She runs to tell Vanraj at first hand.

Hasmuk asks Anupama what happened. Vanraj tells to Hasmuk that Anupama has an idea for his work.

There, Kavya decides to hunt job for Vanraj as well. She says Vanraj can’t find job for himself thus, she has to look for him too.

She asks Vanraj to go for job interview next day. Vanraj agree to go for an interview.

He further asks Anupama to share her idea. Kavya asks what idea.

Samar gets furious on Anupama Decision

Anupama yet again hesitate to share her idea. Leela says to Vanraj that Anupama wants to open café near her dance academy.

Shah’s like the idea. Samar gets furious. Vanraj likes the idea. Kavya disagree with Vanraj’s decision.

Vanraj asks Kavya to support him. Kavya asks Vanraj to go ahead and open his café.

She adds and asks Vanraj not to expect anything from her more than this. Kavya give look to Anupama.

Anupama asks Hasmuk if she did anything wrong b giving the suggestion. Hasmuk asks Anupama not to over think. Samar look at Anupama and leave the place.

Samar asks Anupama to stop worrying about Vanraj, who never valued her. Vanraj says to Anupama it is awkward to work together.