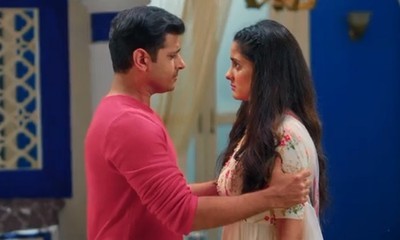 The current episode starts with Virat and Sayi’s argument because Sayi said she will leave the Chavan House soon.

Pakhi is eavesdropping when Sayi sees her shadow and confronts her.

Virat questions Pakhi for taking air outside their bedroom when she should have gone out in the garden.

Virat and Pakhi end up getting into heated argument when Pakhi again and again takes a dig at Sayi.

Virat defends Sayi when Pakhi vents out her anger and blames Virat for ruining and snatching her dreams and happiness.

The trios have a major showdown when Pakhi reminds Sayi that having expectations from anyone only hurt in the end so she should also don’t have any expectation.

Sayi says how she has given the door of happiness to herself, not to anyone else.

Sayi leaves when Virat shuts the door on Pakhi’s face while Pakhi ends up crying bitterly and feeling bad.

The next morning, Virat gets scared hearing the sound of piggy bank.

Sayi requests Virat and convinces him badly when finally Virat gives her 10,000 while Sayi blackmails him that she will have to sell the diamond ring.

The family gets tensed waiting for Sayi.