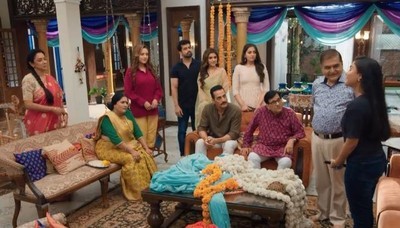 The latest episode of Star Plus Anupama begins with Vanraj and Kavya in car where discuss about Anuj.

Kavya goes blabbering when Vanraj is much disturbed where he recall past.

Vanraj is much insecure of Anuj in Anupama's life.

Kavya wants to do business with Anuj while Vanraj shut her up.

Kavya says Men will be Men while Vanraj says women will be women.

On the other side Anupama goes in her room and dance again and Anuj recalls Anupama and shows his Kaka the same.

Anuj's Kaka GK wants him to get married and settle down while Anuj only thinks of Anupama.

Kavya asks Vanraj to use Anuj via Anupama to deal with him.

Anupama gets angry on Devika where she gets teasing her again and again.

Kavya tries to find out more about Anuj Anupama past but in vain.