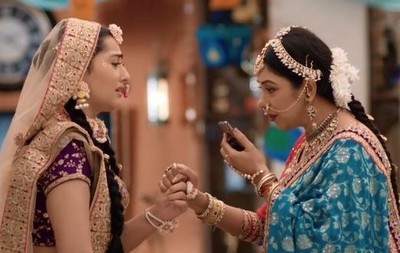 The latest episode of Anupama begins with Anupama informing all the couples in Shah House to turn Krishna and Radha.

Vanraj refuses to be part of the same while Kavya is much excited for the same.

Samar goes out to buy Kesar when he meets Rohan.

Samar turns much insecure and feels Nandini cheated him.

On the other side Nandini is much worried for Samar while Anupama pacifies her.

Anuj and GK have interesting Jasmashtami where the duo turns Krishna and does the pooja.

Pakhi shows Anupama and her friends' photos on TV where Baa Bapuji also witnesses the same.

Kinjal supports Anupama makes everything cool while Pakhi unfolds that Anuj is the same guy who had a crush on Anupama.

Kavya turns happy to know this good news and thinks to do something.

Vanraj scolds Pakhi and asks her to shut the TV.

Baa is much upset with Anupama doing such things and Bapuji stays quiet.

Nandini and Anupama waits for Samar.

Samar is about to hit by a truck when Anuj jumps to save him.

Both Anuj and Samar are fallen on the road post deadly accident on Janmashtami day.

Anupama and Nandini are shocked.