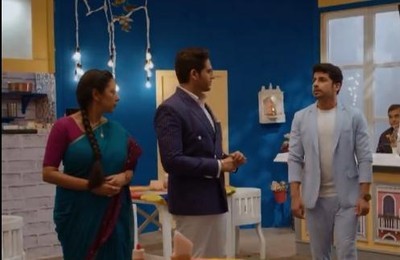 The latest episode of Star Plus Anupama begins with Anupama giving her words to Vanraj and Kavya.

Anupama goes to her room and thanks Kinjal.

Kavya tries to fill Baa's ears against Anupama while Baa is not bothered and scolds Kavya.

On the other side Kaka talks about Anuj over his past and confronts him for not disclosing his love for Anupama.

Anuj knows well that Anupama does not need a man in her life as she is much strong woman.

Samar and Nandini dance when Anupaa gets happy to see their patch up.

Anupama bless the duo and asks to always stay together keeping trust for each other.

Anuj comes to cafe where Aupama happens to serve him.

Anuj is glad while on the other side Vanraj Kavya Rakhi gets to see Anuj Anupama bonding.

Vanraj fumes in anger but controls himself while Rakhi is much happy to meet Anuj Kapadia.

Paritosh insults Anuj and stops him from making the deal.