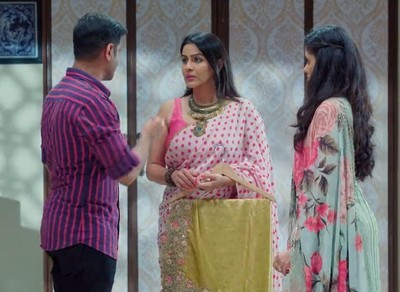 Pakhi comes into her room and Samrat asks if Virat will wear the kurta given by her.

Samrat questions Pakhi about Virat's feelings seeing them together which shocks Pakhi.

Virat comes there and says he is happy about his and Pakhi's relationship and Virat says that he liked the kurta too.

Pakhi leaves while Virat tells Samrat that he hopes he has no misunderstanding about him and Pakhi now.

Samrat tells that he knows he only sees Pakhi as his friend.

Virat asks Sayi that the bag in DIG's office was her bag.

Sayi once again brings Pakhi into their conversation and reminds Virat about Pakhi's deeds and its repercussions.

Sayi blames Virat for acting like Pakhi which irritates him and he tells Sayi that he does not want to see her face.

Shivani asks Sayi to join the Grah Shanti pooja while Sayi says she has to attend lecture.

Later, Virat comes to his room and they both start fight in front of Shivani.

Virat locks Sayi in the room

Virat tells that she will have to attend the pooja and he will show his husband rights to her.

Virat gets irritated when Sayi once again brings Pakhi into their fight.

Virat tells Sayi why the Chavan's like Pakhi more than her.

Pakhi asks Samrat to choose a saree for her as she wants to look the best for the pooja.

Later, Virat locks Sayi in the room and he leaves from there.

Samrat tells Pakhi that he is not Virat and how can she expect him to be like Virat.

Virat tells everyone that he has locked Sayi in the room so that she does not go to her college.

Sayi tries to escape from the window.