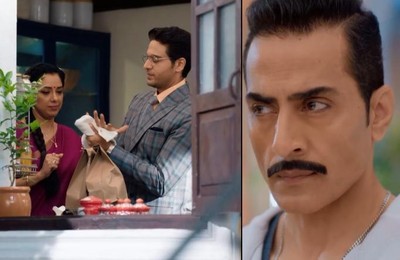 The latest episode of Star Plus Anupama begins with Paritosh insulting Anuj where it turns out to be his dream.

Anuj gets to see Anupama's dance academy and he is much impressed with her photo.

Anuj secretly clicks the photo and keep it safe with him.

Vanraj is restless as he wants Anuj to leave the academy soon.

Rakhi gets happy to enjoy the new drama with a new character and new twist in store.

Anuj and Anupama spend good time where he was about to leave and trips.

Anuj and Anupama hold each other and support each other.

Back home Anuj dreams of Anupama being with him and taking care of her.

On waking up Anuj is much restless and discusses the matter with GK.

Anuj does not want hope in life where GK wants Anuj to think about Anupama and hope for good.

Here in Shah House Baa is much angry on Anupama as she dislikes her closeness with Anuj.

Vanraj Kavya Paritosh Kinjal comes from jog and they are surprised to see Anuj home.

Anuj accepts Anupama's idea and handover the Partnership Deed to Anupama along with sweets.

Vanraj and Kavya are shocked.

Vanraj defame Anupama and calls Anuj had Crush on her in past.