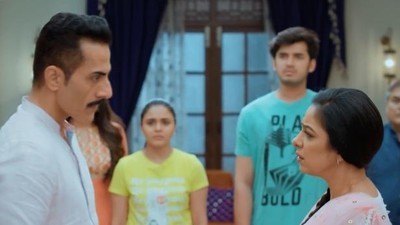 The latest episode of Star Plus popular serial Anupama begins with Anupama informing Bapuji and the line getting disconnected.

The kids compliment the couple Anuj Anupama assuming they are husband wife.

Anuj and Anupama begins to fight when they call them cute couple.

Kids asks them to join the party as they get to see their reunion party video.

Anuj and Anupama when sneeze when the guy asks them to change as they have his parents extra clothes.

Anuj change and come where he looks like a dude.

Anupama marks her entry where Anuj recalls his college days with Anupama where he wanted to confess love to her.

Anuj suddenly falls sick where he is seen in high fever.

Anupama takes care of him the entire night where on the other side Vanraj tries to reach Anupama on call.

Vanraj comes to know that Anuj Anupama are resting in the bedroom where he rages in anger.

Next morning Anuj and Anupama wake up and leave where they book a cab for return.

Anupama returns home where Vanraj welcomes her as usual questions her character posting spending night with Anuj Kapadia in one room.

Anupama loses her cool where she says Agnipariksha was given to Ram not Raavan when Baa raise her voice.

Anupama stops her and decides to leave the house.