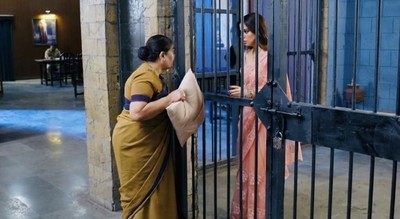 Preeta shares her worries with Shristi who feels pity for her as Karan is doubting her intentions but then decides not to tell her as she will be hurt if she gets to know about it.

Preeta calls a private investigator and asks him to meet her. She is determined to save Karan.

Sameer follows Preeta and dashes with a man who tells him that he has been in jail for five years.

He then sees him meeting Preeta who tells her that he will take care of everything and assures her. Preeta pays him the Money.

Sameer gets suspicious with her this act and says that he doesn't understand what is the truth. He Prays to the God to save Karan.

Preeta comes back and tells Shristi that she knows Karan is innocent and tells her that she will prove him.

She then tells her that she wants to take tiffin for Karan but then Prithvi will get a doubt on her that she cares for him and then he will get to know that Mahesh didn't sign the Papers.

She cooks Food and then goes to Rakhi who tells her not to show her fake concern to her to which Preeta tells her that she doesn't care for him.

She then gives her a tiffin box to Rakhi and tells her that the Police will let her meet Karan if she takes it with her.

She then says that Gireesh was the one to prepare it. Rakhi asks Shristi to never change like Preeta and leaves from there with the box.