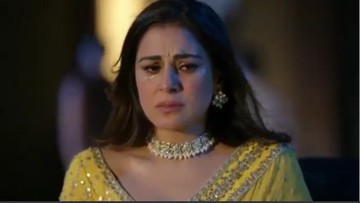 Preeta walks on the road Aimlessly as she remember about Karan's accuses.

Kareena seeing Preeta in the house, gets up from the chair followed by all the Luthras and they leave from there asking Gireesh to bring their meal to their rooms taking Rakhi with them.

Gireesh asks Preeta whether she wants something to which she denies. She gets a call from Maddy and she leaves from there to meet him.

Preeta meets Maddy who tells her that Sandesh is meeting someone and she goes inside as he leaves from there telling her that he has a work.

The Guard tells Preeta about the man who met Karan. She sees Sandesh talking with Prithvi but he has his face covered hence she fails to see his face.

Prithvi hides as Preeta heads towards Sandesh. Preeta asks him who hired him to frame Karan to which he denies and tells her that he is a fan and he is angry too.

Sameer comes there and leaves from there after seeing Preeta with Maddy.

Preeta gets to know about Prithvi

Preeta gives a letter to Sandesh and asks him to give it to hoodie man while Sandesh throws it. Prithvi lifts it to see what is in it.

Preeta chases him but he escapes sitting in an auto.

Sameer and Shristi get into an argument as Shristi asks him whether he is doubting Preeta.

Karan tells Malkana who came to meet him that he has a doubt on Preeta that she was the one to frame him.

Preeta sees Prithvi getting down from the auto and understand that he is the one to frame Karan.