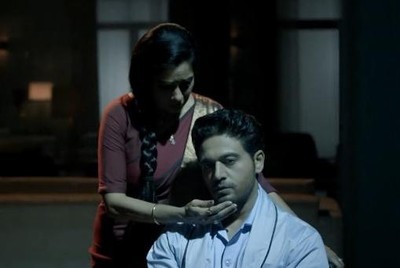 The latest episode of Star Plus Anupama begins with Kavya and Kinjal raising their voice for Anupama.

Kavya begins to insult Pakhi who hates her and questions her if she in real is Anupama's daughter.

Kinjal also going the bandwagon where she humiliates Paritosh and Pakhi for always being much selfish.

Kavya wants Pakhi to beg for an apology before Anupama when Pakhi walks away realizing her mistake and cries in her room.

Pakhi gets banged on her head when she calls Maa and Anupama comes to her.

Pakhi gets consoled by Anupama when she realizes that she was dreaming.

Anupama goes away where she is enjoying her time with Anuj and Anu.

They sleep in their tent house where Anu get tired and she sleeps.

Anupama kiss Anu and later Anuj too who is overwhelmed with the first kiss from Anu's side.

Vanraj does not allow Pakhi to meet Anupama

They fall asleep and on the other side Pakhi is crying.

Vanraj goes to support her when Pakhi says she wants to apologize to Anupama on realizing her mistake.

Vanraj does not want Kapadia's come back to Shah House and asks Pakhi to sleep and not go to Anupama's house.

Dhamakedaar upcoming week with Anuj getting hospitalized and paralyzed.

Anupama is all set to make Anuj stand back on his legs.