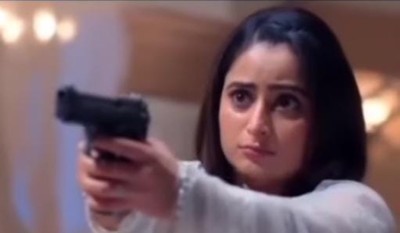 Episode begins with Sai showing her support for Vinayak and Pakhi gets irked seeing that.

She asks her why she is not showing enough support for Savi and more excited for Vinayak?

Virat feels before the deadline is over he has to reveal the truth to Pakhi. Pakhi goes to restroom and someone takes her purse.

Vinayak's colors get mixed up and he panics, Sai says she can help him and then goes to wash his colour palette.

Bhavani feels why Sai is trying to help him and she states Virat is there to help his son.

Pakhi grows tensed upon not finding her purse and then spots Sai holding the bag.

Sai says she saw someone kept it outside so she picked it but Pakhi doesn't trust her.

She also snatches the colour palette from Sai saying she can help Vinayak.

Later Vinayak paints Lord Shri Krishna and Yashodha on the board, he says he portrayed Pakhi and his bond.

Sai gets happy to see Savi wrote Virat, Vinayak, Sai and her names on the board.

Bhavani warns Sai to stay away from Vinayak but Sai replies the latter will regret soon after the truth will come out.

Vinayak wins the competition and Pakhi places the trophy near the temple in house.

Virat stops her to tell her the truth of Vinu but Pakhi is busy with Vinayak to celebrate his win.

Chavans throw a party for him and meanwhile Pakhi looks for a pendrive in her bag and doesn't pay heed to Virat while he reveals the truth.

Precap- Pakhi tries to shoot Sai when she tells her to give back her son.

Pakhi then points the gun at herself and Virat gets stunned seeing the scene.

Virat and Sai try to snatch the revolver from Pakhi but she fires.