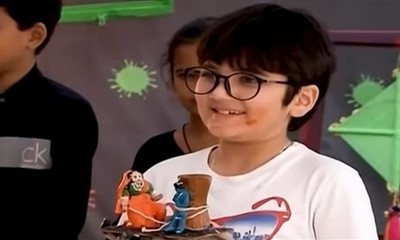 The upcoming big competition in Vinu and Savi's school in the upcoming story of Star Plus serial Ghum Hai Kisi Ke Pyaar Mein (GHKKPM), a lot is going to change.

Virat surely promises Sayi that he will tell Vinu's truth to Pakhi very soon but nothing like such works out.

Moving on in the storyline, now it's big time for Sayi to get a reality check about Pakhi and Vinu's strong mother and son relationship.

When Vinu shows his clay model of Yashoda Maa and Lord Krishna,

He gives a very thoughtful explanation of his pure bond with his mother Pakhi who is not even his real mother but loves him a lot.

So, when Vinu talks about his bond with his Yashoda maa, Sayi thinks that he is talking about.

However, when Vinu dedicates his model to Pakhi and thus gifts her the same, now this badly hurts Sayi.

Sayi to take a drastic step

Vinu confesses on the stage that he loves his Yashoda Mother more than his Devki mother (Sayi) and this will never change.

Let's see if she takes any impulsive step to get Vinu from Pakhi.