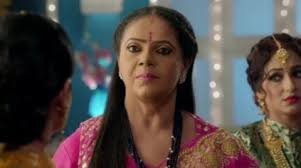 Meenakshi is super irked to see as how Abeer is getting influenced by Mehul and even changed his name.

Meenakshi now decodes that Mishti is digging out Mehul's truth and now Meenakshi makes a plan.

Meenakshi knows that only Mishti can save her son Abeer and stop him from leaving Rajvansh house.

Meenakshi thus seeks Mishti's help and holds her hand infront of her and asks her to see how Mehul is making Abeer as Abeer Kapadia.

Will Meenakshi and Mishti join hands against Mehul, stay tuned for more exciting updates of the upcoming episodes only on serialgossip.com