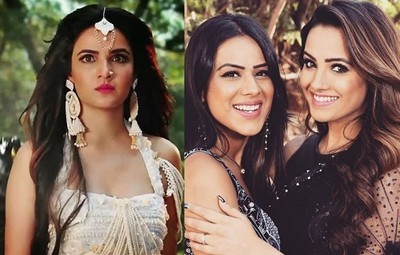 The best TV series of Colors and the most watched supernatural show Naagin 4 has recently hit the screens.

The story is witnessing the intriguing chapter of Naagin Brinda’s love and revenge saga.

The show is starred actor Vijyendra Kumeria, Jasmin Bhasin and Nia Sharma in the lead roles where soon actress Anita Hassanandani made her entry.

Talking about her exit from the show, Jasmin Bhasin reveals that her character was already decided to quit soon as keeping Nayantara’s exit a mystery which will soon unfold on its own.

Jasmin Bhasin also revealed that her entry in the show was to keep the real Naagin a mystery where she was shown as Naagin in the promos but Nia Sharma turned out Naagin.

Jasmin Bhasin has also shot her last part for the show.

Following Nayantara aka Jasmin Bhasin’s exit from the show, the show story will not revolve around Vishaka and Brinda’s battle and Dev-Brinda’s love story.

Stay tuned with the latest updates of popular TV shows and Hindi serial at the entertainment news website Serialgossip.com

Naagin 4: Brinda turns more deadly to save her sister from villainous Vishaka

Naagin 4: Brinda turns more deadly to shield Nayantara from villainous Vishaka The supernatural TV show Naagin 4 is up for some high voltage drama and twists and turns in the ...

Naagin 4: Naagin Vish turns to kill Nayantara taking old revenge on Brinda Colors popular TV show Naagin 4 is up for the deadliest face off between Vish and Brinda. Earlier in ...

Naagin 4: Naagin Brinda's first war killed Madhav to dead beginning revenge The top TV supernatural show Naagin 4 is all set to begin the revenge saga of Brinda against the ...

Naagin 4: Vish brainwashes Nayantara badly uses her to kill Brinda The top TV supernatural show Naagin 4 is up for the thriller revenge saga to begin in the storyline. So far ...

Brinda (Nia Sharma) and Dev’s (Vijyendra Kumeria) love in the rain poisonous game begins in Naagin 4 Colors popular TV serial Naagin 4 is up for a high voltage twist in ...