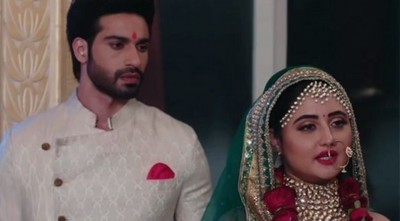 Naagin Brinda is getting ready for her revenge on Dev and Parikhs.

Meanwhile here Vish kills Mundika and takes her powers to get a new enemy in this revenge war.

The twist in the tale is that Shalaka is none other than Brinda's sister Nayantara.

Vish takes Mundika's identity and hides her real identity to get Nayantara free from the pillar in which she trapped her earlier.

Where Vish brought Nayantara to new life and gave her new face and new identity,

Vish compels Shalaka to enter in Devs family and take her old revenge from her sister Brinda.

Shalaka and Brinda face off

Unaware of Vish identity, Nayantara aka Shalaka has teamed up with Vish.

Now when Dev and Shalaka get married, Shalaka promises to be his support after his ex-wife Brinda cheated on her.

Further Holi will bring Shalaka and Brinda face off,

Let's see if Brinda coule recognize her sister behind the fake face of Shalaka.