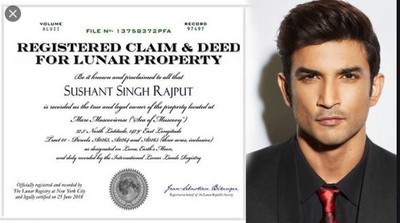 Sushant Singh Rajput’s love for science and passion for space

The sudden demise of Sushant Singh Rajput has left the film industry and people , leaving everyone in major shock.

Actor used to talk about stars, the moon and the sun and other planets, for which even he owned a high magnification telescope and liked to discuss observations and experiments on his social media.

But his passion and love for space studies did not ended here as he used to explore new planets and liked to see rings.

In the region named Mare Muscoviense or the ‘Sea of Muscovy’, he bought the property from the international Lunar Registry.

However, before Sushant Singh , Shah Rukh Khan was gifted a piece of land on the ,moon by fan.

Stay tuned with us for more updates