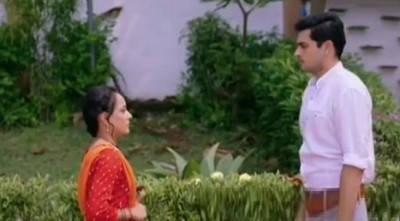 Anant is angry at Gehna for Gehna didn't pay attention to their plan and ultimately Kokila got in danger.

Anant, Gehna and Gopi are on a mission to make Ahem recall his lost memory.

Anant warns Gehna that if Kokila and Gopi will get in danger because of her, then he will not spare her.

Gehna stands still when angry Anant threats Gehna saying he will oust her from the house.

Gehna realized her mistake and wants Anant to forgive her but Anant is angry at her.

Meanwhile, Kanak is suspicious of Anant, Gehna and Gopi's togetherness.

Kanak to spy on Anant Gehna

Kanak is not ready to bear Anant and Gehna's closeness.

Kanak feels suspicious of something going on between the trio.

Kanak and Sagar's evil motives to trap Gehna to fail or succ...

Anant (Harsh Nagar) to save Gehna (Sneha Jain) from Sagar's ...