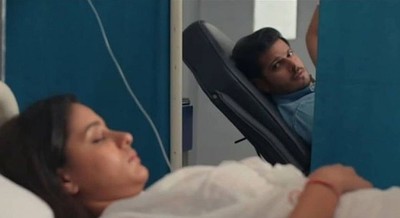 The upcoming twist in Ghum Hai Kisi Ke Pyaar Mein is up to see the shocking twist of Sayi attempts to suicide.

Virat hospitalizes Sayi but the news of Sayi on the verge to die shakes Virat to the core.

Virat doesn't want to lose Sayi after Kamal and agrees to do anything to save her.

From the very moment of donating the blood, Virat's fate gets tied to the destiny of Sayi and Virat decides to marry Sayi.

Sayi to marry Virat for a reason

Sayi will soon gain her conscious and will breakdown finding herself alive.

Sayi doesn't want to live without her Aaba but Virat again turns a supporting system to Sayi.

Sayi will finally agree to marry Virat after he saved her life and also to fulfil her Aaba's last wish.

Even so, will Virat and Sayi be able to accept each other with heart?

Stay tuned with serialgossip.com to read the next update.