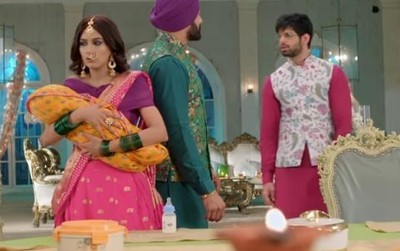 It was earlier seen that Meher and Sarabjit refuses to give away Karan to Manav.

Manav gets hurt and turns negative.

Manav decides to divorce Aditi, defame Meher and her character.

Now Manav gets Seema in confidence where he reveals the entire truth to her.

Seem gives him blessing to win his battle and supports him.

Manav thus files custody case for Karan where he is all set to win the case by hook or by crook.

On the other side Sarabjit and Meher refuses to stain Manav's character and love to win Karan's custody.

Will Manav cross all his shameless limits to win Karan?

Choti Sardarni: Manav blackmail Sarabjit to giveaway Karan or else he will divorce Aditi