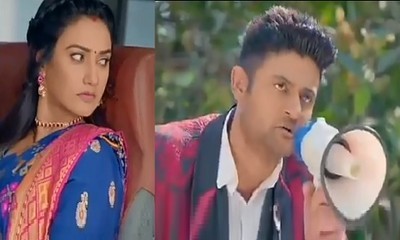 Star Plus TV serial Shaadi Mubarak will see KT and Preeti's love in the air.

KT and Preeti's relationship falls shattered when the truth reveals.

However, with Preeti's exit, KT finally realizes that the friend zone in which he was living with Preeti is actually his love zone.

KT rushes to stop Preeti from leaving but fails to find Preeti anywhere at the bus stop.

KT plays his master move when he takes up a mic and loudly confesses his love to Preeti.

Not only this, but KT climbs on the top of the bus and stops Preeti from leaving him.

Preeti doesn't want to return back to KT and thus leaves while KT stands hopeless.

Stay tuned with SERIALGOSSIP.COM to know the next update.