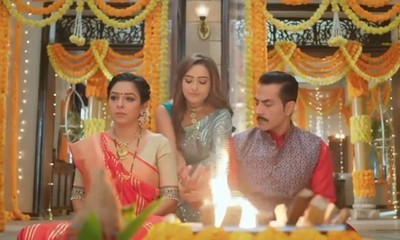 Baa announced an auspicious pooja for Vanraj on his birthday.

Anupama refuses to sit in the pooja and compels Kavya to accompany Vanraj.

Kavya gets overwhelmed realizing how Anupama gave her rights to her.

Kavya then takes a surprising step when she gives Anupama's hand in Vanraj's hand.

Kavya tells Anupama that she gave her love rights, so she is giving her the authority of Vanraj's wife.

Kavya reminds Anupama that she is Vanraj's love but Anupama is his wife and this right, she can't snatch.

Kavya's such step stuns Vanraj while Anupama is also surprised.

Though the pooja begins, Kavya is cooking something suspicious by giving Anupama her rights.

Check out the new updates at SERIALGOSSIP.COM to know everything.

Anupama: Kavya sits in pooja with Vanraj and Anupama sidelin...

Anupama: Kavya and her next move to ruin Vanraj

Anupama: Kavya and her next move to ruin Vanraj The latest ...