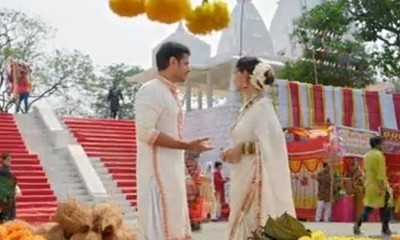 Pulkit's entry and the huge revelation of his separation from Devyani jitter Sayi.

Sayi is shaken to the core realizing how unjustified and cruel Bhavani has been on her own daughter Devyani.

Everything changes the moment Pulkit marks his entry into Chavan mansion.

What is shocking is that even after Sayi exposes the past, Virat turns against Sayi.

Not only this, Bhavani claims that Pulkit's betrayal made Devyani lost her mental balance.

Consequently, this leads to the high time separation, ugly fight and the blame game in Virat and Sayi's love life.

Virat blindly believes in Bhavani that when Sayi tries to expose how Bhavani separated Pulkit and Devyani,

Virat gets misled by Bhavani when he yells at Sayi for once again hurting his family in her stubbornness.

Virat ousts Sayi from Chavan house and starves her again.

Virat and Sayi's relationship is falling drastically, but let's see if there is little chance of positivity.

Do read the latest and the new updates at SERIALGOSSIP.COM