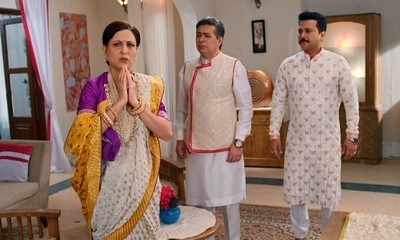 After the huge revelation of Pulkit and Devyani's relationship, Virat counts on Bhavani.

However, Bhavani, Ninad and Omkar defend each other to prove Pulkit bad guy.

Virat blindly believes Bhavani when Bhavani claims that Pulkit betrayed Devyani and he is responsible for her illness.

Virat gets influenced and misunderstands Pulkit.

Meanwhile, when Bhavani blames Sayi for trying to ruin their lives and bringing pains to Devyani,

Virat gets angry at Sayi for hurting everyone.

Consequently, the blame game leads to a drastic fight between Virat and Sayi.

Virat again decides to punish Sayi when he expels her out of the house.

So, what will be the new circumstances and will Virat ever realize the reality,

Stay up to date with SERIALGOSSIP.COM for more updates.