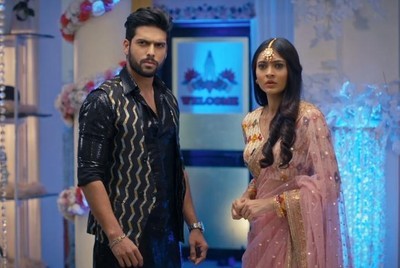 Raghav and Pallavi are always seen at loggerheads being poles apart.

Now Raghav and his amma and Keerti comes to Pallavi's house to attend the function.

Pallavi gets shocked to see Raghav is Amma's son.

On the other side Pallavi is busy with function when Raghav admires her.

Raghav praises Pallavi's beauty where he is much overwhelmed to see her.

Later he recalls his enmity with Pallavi and reminds himself that he needs to kick out Pallavi from Hyderabad within 15 days.

Raghav and Pallavi come close and begin their nokh jhok moment as usual.

Mehndi Hai Rachne Wali: Raghav and Pallavi's sneak out gets ...