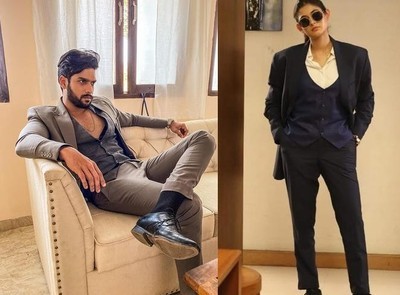 It was earlier seen that Raghav and Pallavi have started coming close and at the same time are respecting each other.

There were many instance where Raghav was seen carrying Pallavi on his shoulder and drop her to the destination when she refused to come along.

At the other side Pallavi too is seen supporting Raghav against her family members knowing he is innocent.

Also when Raghav ruined the cake made by Pallavi on realizing his mistake Raghav brings a cute cup cake to bring smile on Pallavi's face.

Raghav and Pallavi are taking efforts to keep each other happy and stay in friends mode.

Pallavi to imitate Raghav Rao in the next track

With regards to upcoming twist in Mehndi Hai Rachne Wali Pallavi will be seen in all new look.

As per the ongoing storyline we have seen Pallavi as Saree Ka Dukan that is always in saree.

In the upcoming track Pallavi will be seen wearing a four piece suit just like Raghav and that too in his style.

Pallavi is all set to imitate Raghav and at the same time entertain loyal viewers.