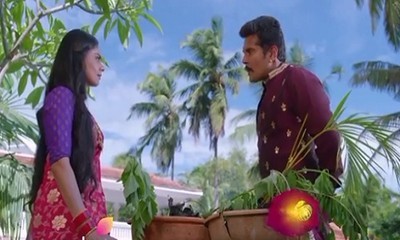 Molkki: Sakshi's challenge to Virendra gets Purvi married to Vipul

The topmost popular show Molkki is gearing up for Purvi and Vipul's marriage.

So, Sakshi is super excited to see Purvi and Vipul as a couple but Virendra is pissed off at it.

Virendra confronts Sakshi for trying to unite Vipul and Purvi and stops her from doing so.

However, Sakshi is confident that Purvi will agree to marry Vipul.

Before Virendra could say something, Sakshi challenges Virendra that within one week Purvi will herself agree to marry Vipul.

Virendra believes in his lady love Purvi and her love for him, thus, he agrees to Sakshi's challenge.

Though it is undeniable that Purvi once loved Vipul truly before marrying Virendra.

So, does this mean, Purvi will marry Vipul?

If yes, then what will happen to Virendra and Purvi's love promises and marital relationship?

Make sure to read all the latest news and updates at SerialGossip.com

Molkki: Poor Purvi disgraced for being Molkki In the Colors...

Molkki: Sakshi compels Virendra to choose her or Purvi