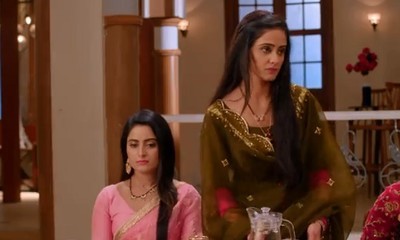 Your favorite Star Plus TV show Ghum Hai Kisi Ke Pyaar Mein is about to see Virat and Sayi’s major confession in the bedroom.

Virat gifts a ruby pendant to Sayi which brings a big smile to her face.

However, she refuses to accept it as she doesn’t want the family to create a huge issue of the gift just like how they made of saree.

Virat is shocked knowing Pakhi told the family about the saree gift when they already wrapped the topic the last night.

Virat starts to get away from Pakhi

The story is getting quite intriguing as this is the first time when Virat disparages Pakhi because she hasn’t eaten the food from the morning.

Virat is kind of sick of Pakhi’s starving drama as recently she did the same when Sayi went to Pulkit’s house.

While he is fed up with Pakhi’s childish act of staying starved every time, he also refuses to convince her to eat food when Sayi requests him to do so.

Virat has started to get away from Pakhi seeing her real face slowly and steadily.

So, what new twists and turns will come up next in the story,