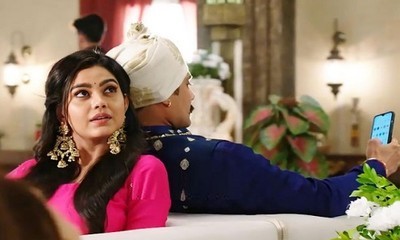 Things are going to spice up in Virendra and Purvi’s love story in the upcoming story of Molkki TV serial.

Daksh and Purvi aka Dhwani are all set for their love drama to impress Dadi.

Virendra comes to meet Daksh over their business deal when Daksh turns to introduce his fiancée aka Dhwani (Purvi).

However, Purvi doesn’t come due to some urgency and here when she calls Daksh, Virendra picks up the call.

The moment of truth hits Virendra harder when Purvi speaks up and he recognizes his Bawri’s voice.

Virendra gets curious to know about the girl whose voice resembles that of Purvi’s.

Though Purvi is dead for Virendra, will he be able to find that she is alive, not dead?