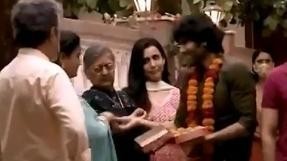 It was earlier seen that Amrita advises Kabir to start looking for a job and turn the real Karan of the family.

Kabir wants to help the family in the time of need and financial crisis.

Kabir thus goes for an interview in Meera's company where she plays tricks and get him out of the company.

Kabir is not less where he plans major Jugaad and gets Dolly in front of Meera's Boss.

Kabir cracks a deal with Meera's Boss to hire him and bags a 50000 salaried job.

Kabir comes home with garland in his neck and calls for a huge celebration where Amrita and the entire family members refuse to believe Kabir bagged the first job that for Rupees 50000 start.