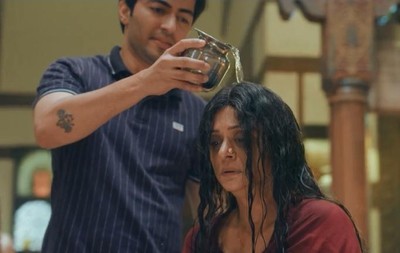 Dev understands his mother's concern where he makes her feel lighthearted.

Dev is ready to give a bath to Suman where he keeps Rishita at bay.

Rishita begs for an apology where she is extremely sorry for the state while Dev scolds Rishita.

Dev keeps Rishita out of Suman's work where he pours water on Suman giving her bath and gives her fresh clothes to change.

Suman keeps her eyes down

Suman cries where his eyes are lowered.

On the other side Suman changes her clothes and Dev lifts her and keeps on seated on the swing and combs her hair.

Rishita stands helpless where she wants to help but Dev does not allow it.

Stay tuned to serialgossip.com for more updates on Star Plus Pandya Store.