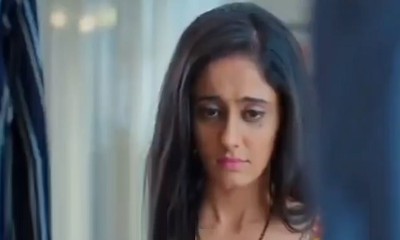 The upcoming track in Ghum Hai Kisi Ke Pyaar Mein will focus on the separation track of Virat and Sayi.

As per the current storyline, Sayi is secretly bidding adieu to everyone in the family.

After Ashwini, and Shivani alongside others, Sayi is meeting Virat for the one last time before leaving the Chavan Niwas.

Where Sayi takes all her documents from Virat, she keeps his gifted pendant and ring into his cupboard.

While Sayi doesn’t want to take anything from Chavan Niwas,

Virat is unable to understand and realize that in actuality she is leaving him and this time her exit is going to be really painful for him.

Virat to regret his anger

Sayi indirectly bids her adieu to Virat while she also thanks him for doing so much for her and always supporting her.

While Virat is completely clueless of what is going to happen and what major step she is going to take,

Virat will soon get a huge shocker on finding her secret note just after his exit.

Now it would be highly intensified to watch if he could save her life after she meets with accident.

GHKKPM: Right after Devi lashed out at Virat Patralekha

Death lingers on Sayi, Virat to take a drastic step in Ghum ...

GHKKPM: Aniket and his squad protest against Virat

GHKKPM: Aniket (Suraj Sonik) and his squad protest against V...

GHKKPM: Sayi to deal with a life and death situation

GHKKPM: Sayi (Ayesha Singh) to deal with a life and death si...