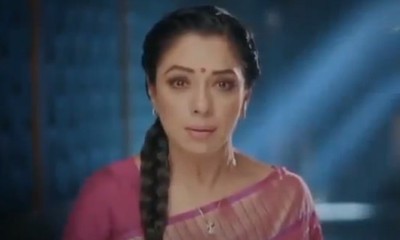 The upcoming story of your favorite TV show Anupama will focus on Anupama’s cold war against Vanraj.

Anupama is quite triggered seeing ­Vanraj trying to control her.

After seeing Anupama and Anuj together, Vanraj questions Anupama’s character and badmouths their intimacy.

Anuj gets so triggered that he loses his cool and hits Vanraj grabbing his collar.

Anupama feels disgusting at Vanraj’s such step where he has finally crossed the line.

And thus she takes the decision to now live her life on her own rules without caring for what anyone thinks about her.

Anuj keeps a request before Anupama

After the pub flight between Anuj and Vanraj, the matter doesn’t end here.

But it gets worse when Anupama returns home and Kavya creates a huge issues of what all happened in the pub.

Adding more to this, Vanraj shames Anupama’s character and this is when Anuj keeps a request before Anupama to shift to a new house.

Major consequences in the upcoming storyline will make Anupama and Samar leave the Shah House and shift with Anuj.

However, how this major development will take place is worth watching next in the show.

Anupama: Anuj and Vanraj's drunk moments will make you laugh