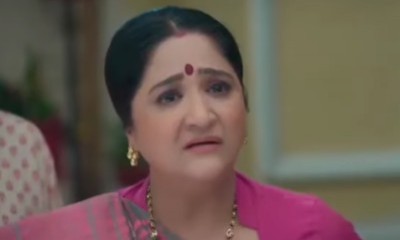 In Anupama there will be a major havoc seen amidst the viewers in the name of Kinjal's migration from the Shah house to Kapadia house.

The upcoming episode will definitely thrill the audiences as Anupama will snatch Kinjal from Paritosh and Shah house.

Leela will feel that it is Anupama who has made all the situations worst by filling wrong assumptions in Kinjal's head.

Kinjal will however seen clearing off the air with the explanation that Kinjal wants to stay all alone for the time being with Anupama and no one else.

Leela gets the hint that inspite Anupama leaving the Shah house than too Anupama's essence is still present at Shah house affecting the house chores.

Anupama gets this great responsibility that no matter what happens Kinjal and Arya will be staying with Anupama just like a happy family.

Anupama will hence experience a great amount of joy over Kinjal's ghrah pravesh at Kapadia house.

On the same notes Anupama will also be seen giving some good pieces of advice to Kinjal on account of marital life.

Will Kinjal actually be able to retaliate towards the ample of love that Anupama will shower?

Stay tuned with me to get some more gossips on Anupama and Kinjal.