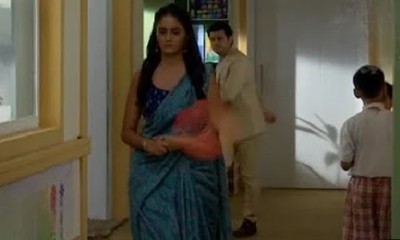 Virat prepones Savi’s interview in the school to prove to Sayi that her home-schooling didn’t benefit Savi.

Interestingly, Savi passes the entrance test very well and even stuns Virat with her intelligence.

Now, the story intriguingly takes a U-turn when Sayi refuses to get Savi’s admission to Vinayak’s fancy school wherein expensive gadgets and lifestyle are given more priority than education.

Therefore, this pisses off Virat because Sayi is not ready to agree with his decision.

However, this argument doesn’t last long because eventually, Virat agrees with Sayi.

And now when Sayi has convinced Virat to the admission to another school,

Here this badly pricks Pakhi’s heart because she doesn’t want Vinayak to leave his school and study with Savi.

Pakhi and Virat on loggerheads

Now, this will lead to Virat and Pakhi’s big fight coming up next because the latter is trying harder to separate him from Savi.

Let’s see what happens next and how Sayi protects her Savi amid all this.

GHKKPM: Ashwini breaks down in tears as Sai shows disrespects