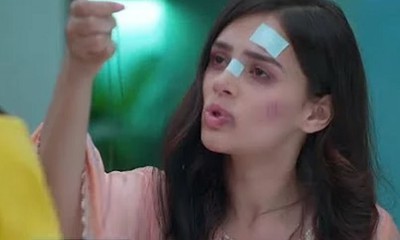 Star Plus prime-time Hindi TV serial Anupama is now all set to see further some major changes in the upcoming storyline.

Earlier we see how Anuj and Anupama bring Dimple and Nirmit to the Kapadia Mansion.

A huge shocker hits Anupama and Anuj when Nirmit decides to leave the house because he can’t accept Dimple who has fallen victim to rape.

Therefore, when Anupama begs him to stop for Dimple who left her everything for him,

Here the twist in the tale comes up when Dimple stops Anupama asking her to let the latter go because she also doesn’t need any man to support her.

And that’s when seeing Dimple’s courageous avatar, Anupama gets emotional and feels proud of her.

Interestingly, this growing mother and daughterly bond between Anupam and Dimple will now irk Pakhi to the core.

As usual, Pakhi is going to start her blame game drama to insult Anupama’s motherhood who sheltered a stranger and ousted her own daughter from the house.

While Anupama is not going to leave Dimple’s hand but will accept her as her own daughter,

Let’s see how Pakhi’s drama will now give a new challenge to Anupama who now feels proud on Dimple more than she ever felt on Pakhi.

In between, it would be highly intensified to watch how Dimple will fight for her dignity and get her culprit punished.